The next steps in my process.
These pages show some thumbnails of my ideas regarding the theme. 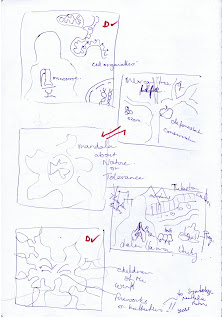 Some are more detailed than others, and you can see that I go back and make changes.  I decided that the two in the middle with the double ended arrow could be merged into one idea.  sometimes I need to add notes, as in the bottom thumbnail, to remind me about what is in these quick sketches or what they symbolise. 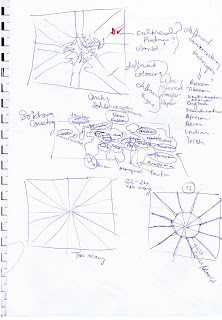 This thumbnail was developed a little more with some calculations and extra notes. 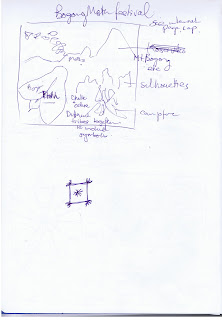 Whilst this last thumbnail is more detailed in the notes added.  Allof the diagrams are just that.  They are sketchy notes that may become work.  From these, hurried sketches, I create mock-ups in photoshop which I print out full size and put on my Design board for a while. 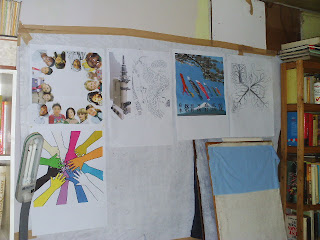 As I am walking past them each day, I make mental notes of additions to make, of how to do certain parts and alterarions to make.  Here are five mock ups.  Some are a printouts of only one layer of the piece, some are just line drawings, and some are just photo collages.  All have had changes made to them since this photo and there are  a few more of them now.
At this stage, I might take only one of them to the final stage, or I might take them all and add a few more.
This is only a design process and changes will happen at other stages as well, so the final work might actually bear little resemblance to my initial mock up.  And of course, the photo mock ups have no texture or dimension.  They are just flat pictures, so changes may occur when they metamorphosize into textiles.

Remember everything in your sketchbook does not have to become a finished piece of work.  They are just ideas that you are playing with.