Just a short one, today, and a change from the printing for a bit (even though I am still going - and running out of papers!) 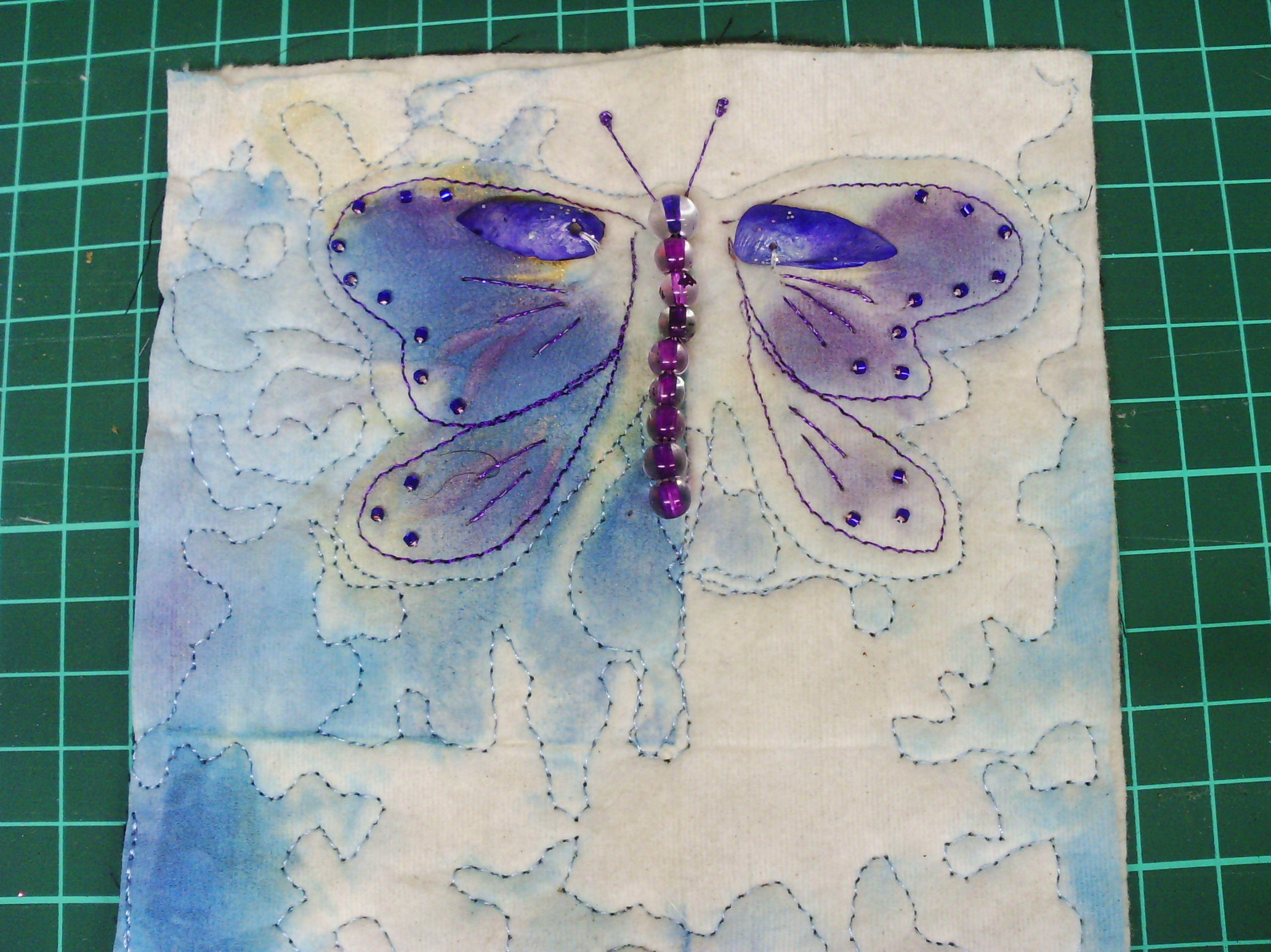 I made a little journal quilt today.  I was inspired by a baby wipe that had cleaned up when I was painting.  The way I had held it when I wiped made purple finger prints and they were arranged like a butterfly's wings, so I outlined the wings and added some beads, shell bits and stitches to it.
The interesting thing about this is that if I hadn't tidied up yesterday, I would never have seen this wipe.  I often find when I am tidying up that I find inspirational bits, especially after a really busy time in the studio, and of course being the hoarder I am, if I didn't keep all these bits and pieces that normal people throw out, well, where would my inspiration come from? lol.
I have missed my journal quilts, perhaps this will spur me to get back to them.
Posted by Vicki Miller at 5:20 PM

My favourite shape from my enormous monoprinting session, was the feathers.
Here are a few prints.

As I said, L loved these prints the most and so I did a bit more work on one of them. I added some detail with a gold pen and also a poem.  Below is a close up. 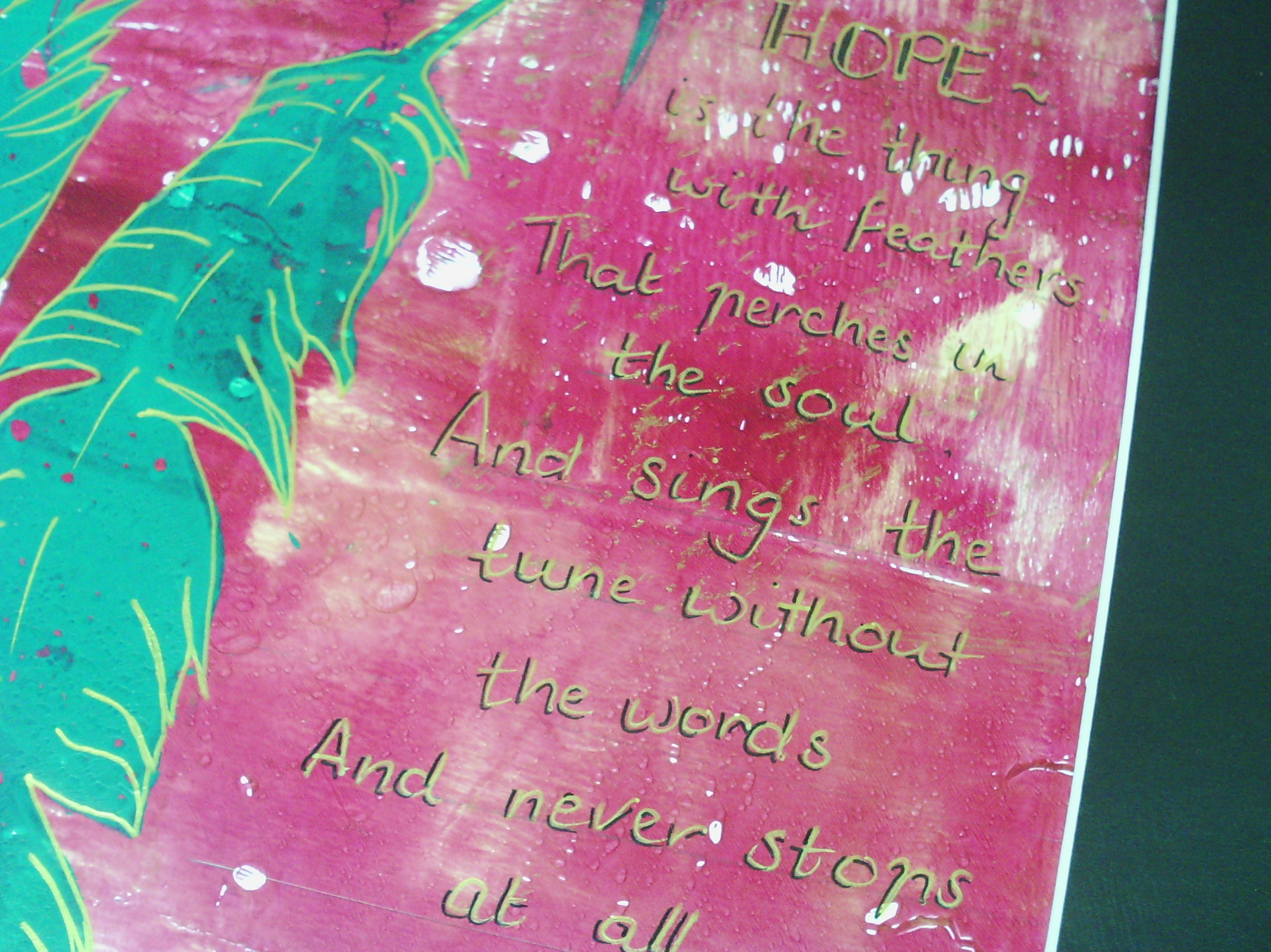 I also added one of the prints which was on tissue to my journal. 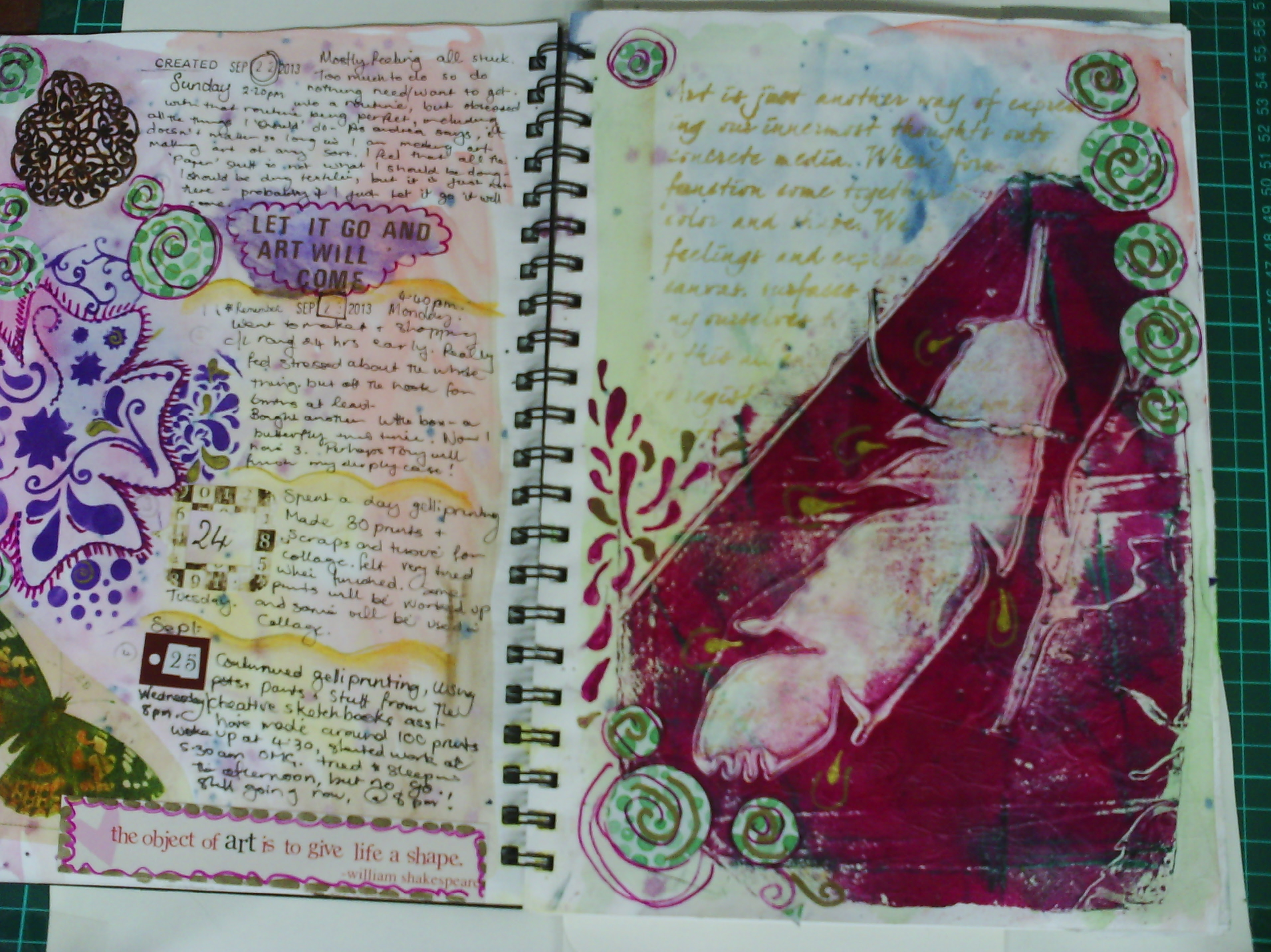 And that's all for now.
Posted by Vicki Miller at 9:07 AM

A bit of monoprinting - butterflies

Over the last week or two, I have been engrossed in gelatin printing.  I have amassed over 100 prints, a few of which I will take further, and many of which will become journal fodder.  I won't go into detail about the process, but you can watch Julie fei fan Balzers recent video for some pointers
So let's have a look at a few butterflies. 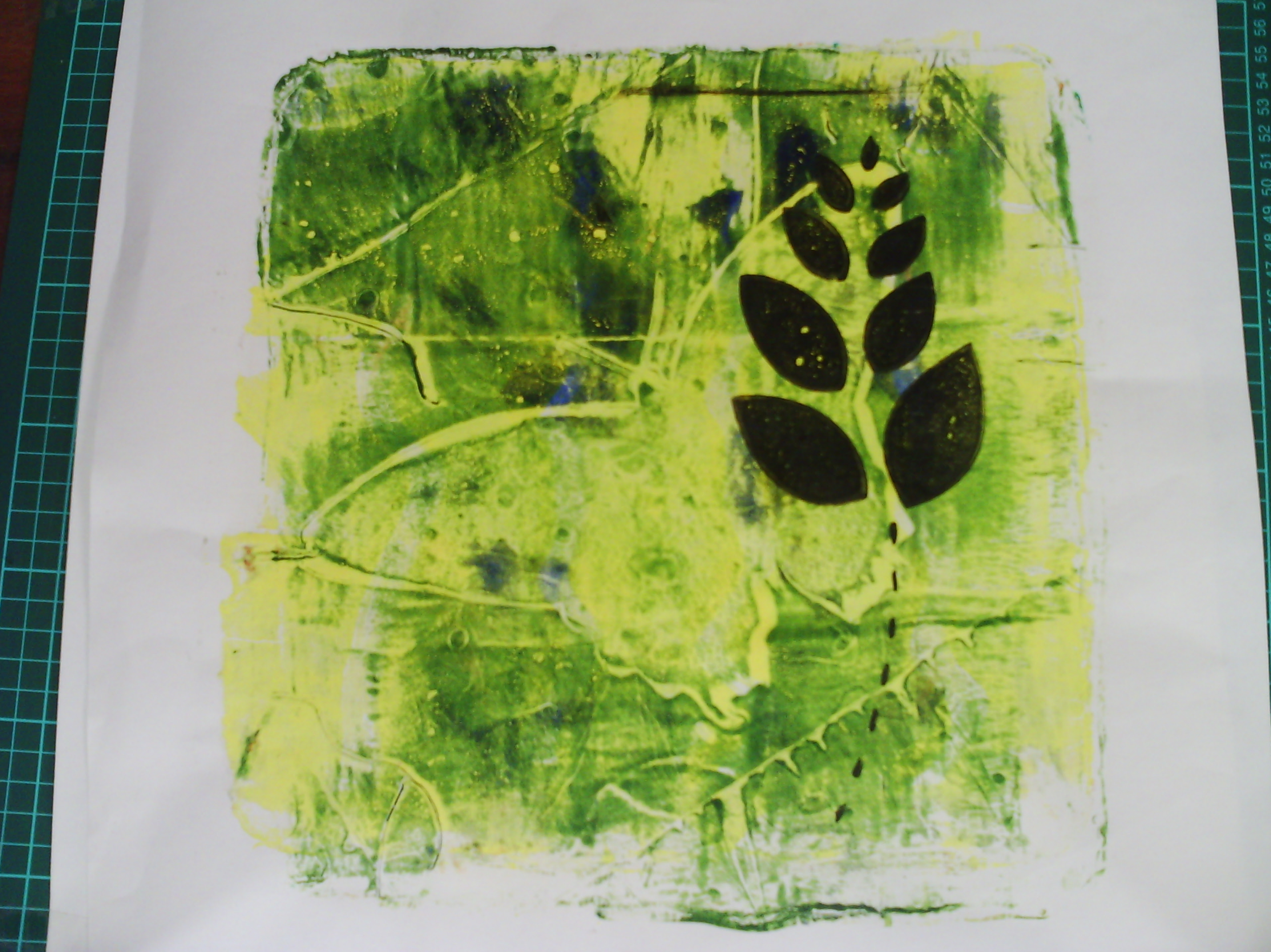 Most of the prints are three layers, but this one has only two. The background layer is the third print off from a butterfly stencil.  What this means is that after I had printed the green butterfly only on some other pages, I lifted the stencil off and printed a negative print - the butterfly is pale, with not much paint as this had been removed, whilst the background still had plenty and created the subtle green layer, which I then printed over with the black stencil. 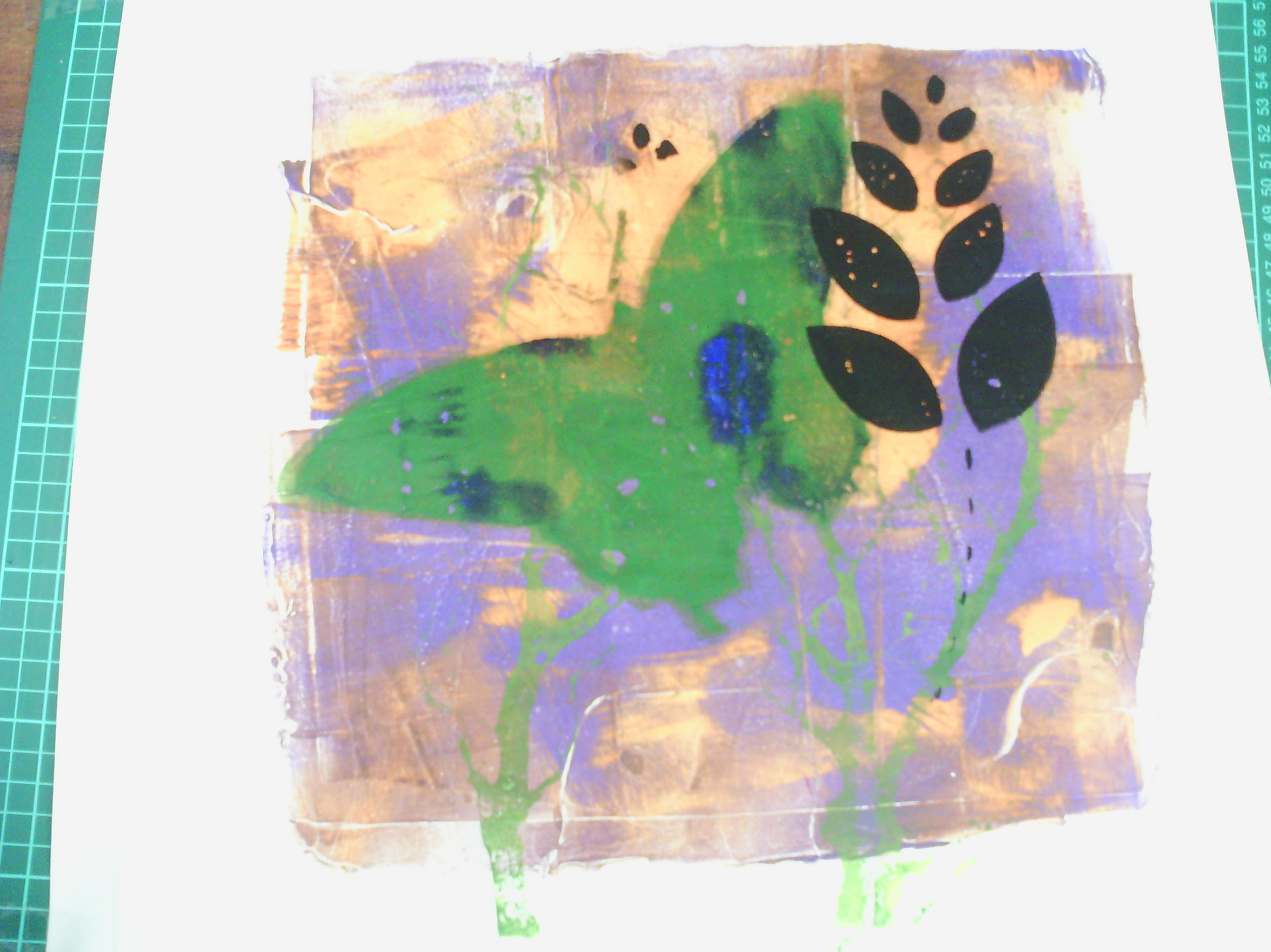 This one had the requisite three layers. The first was just a mix of two colours brayered on to the gelatin plate
The second was the positive butterfly print, then third, was the black print. 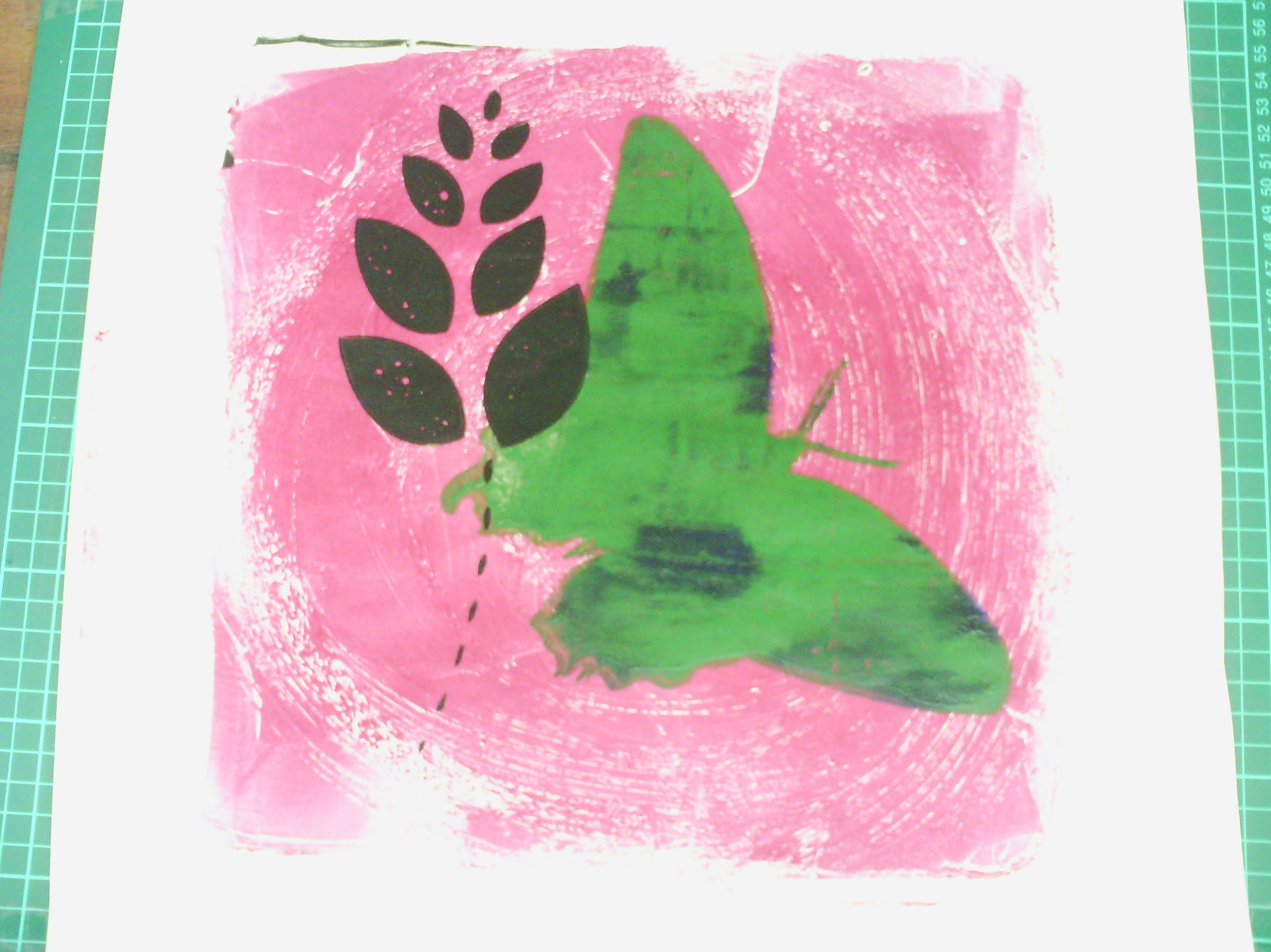 Here is another three layer one.  The pink layer was just magenta paint, but I swished around in a circle with a BBQ basting brush before I printed, then, again, the second and third layer are the same as the print above. 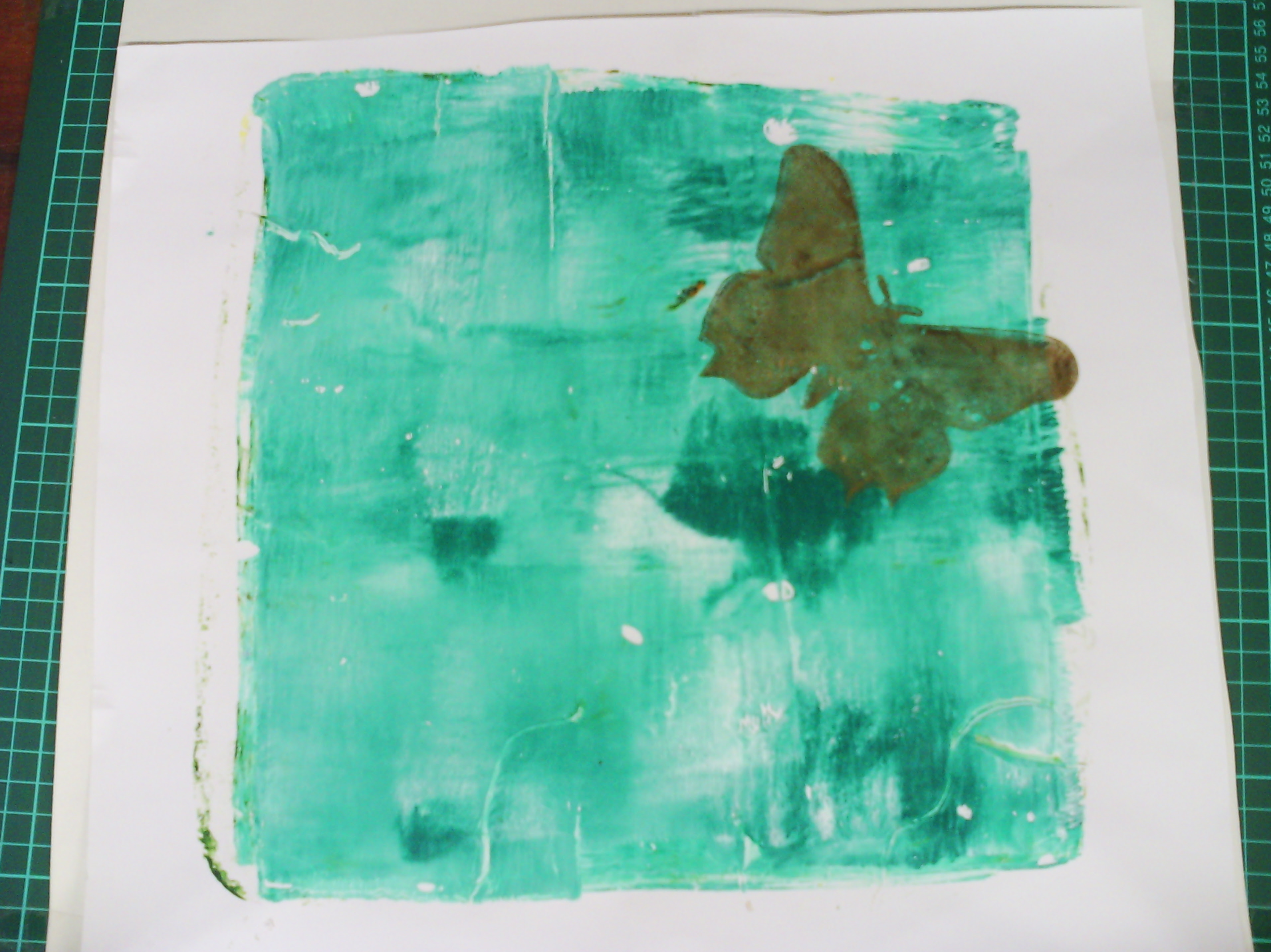 This one has only two layers as I did not add the third accent layer. 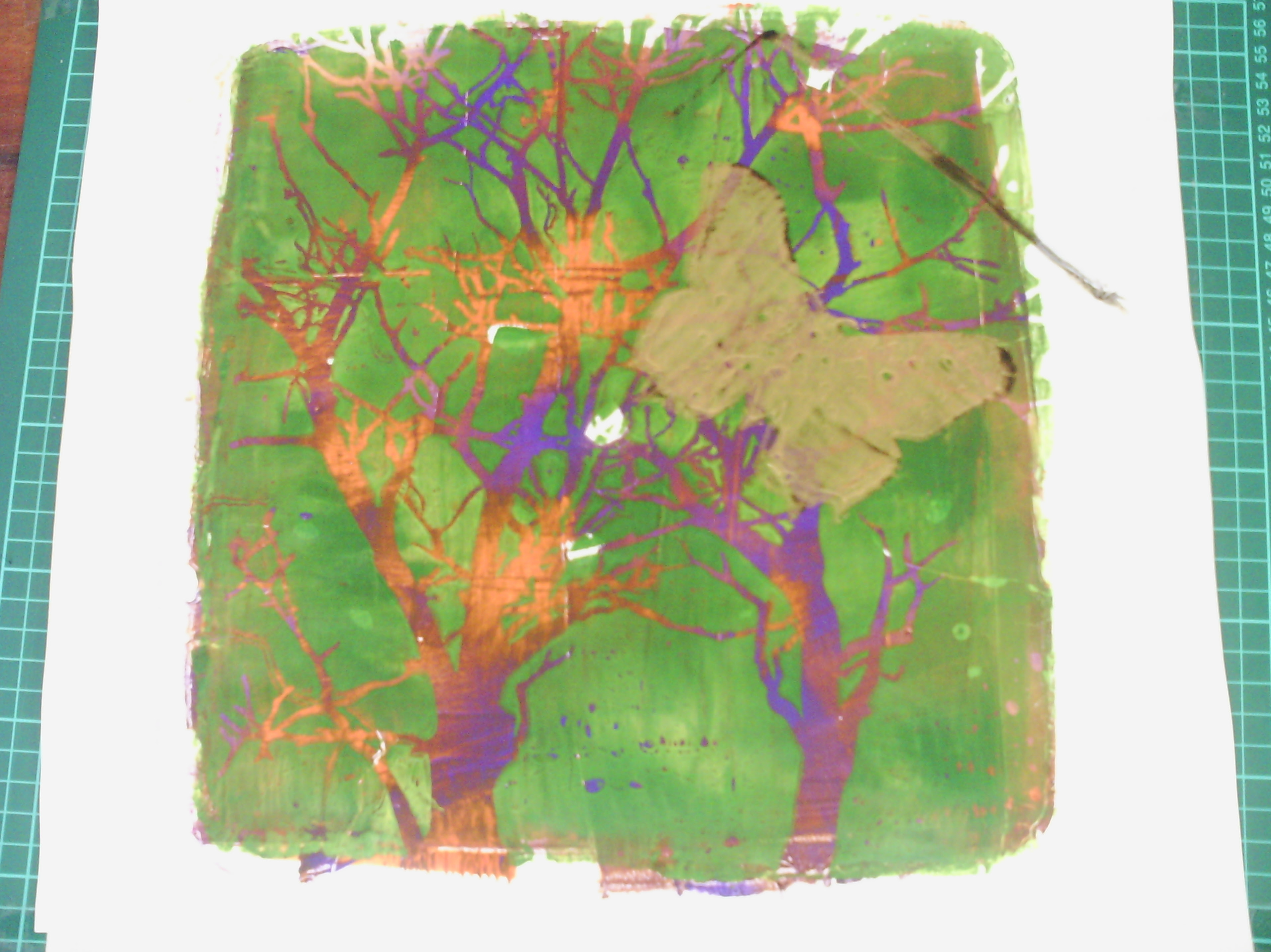 This is a different three layers.  In this one I started with just  the purple and orange layer.  I overprinted with the green using a tree MASK, so the tree remained the orange and purple.  Then I overprinted the butterfly in gold. 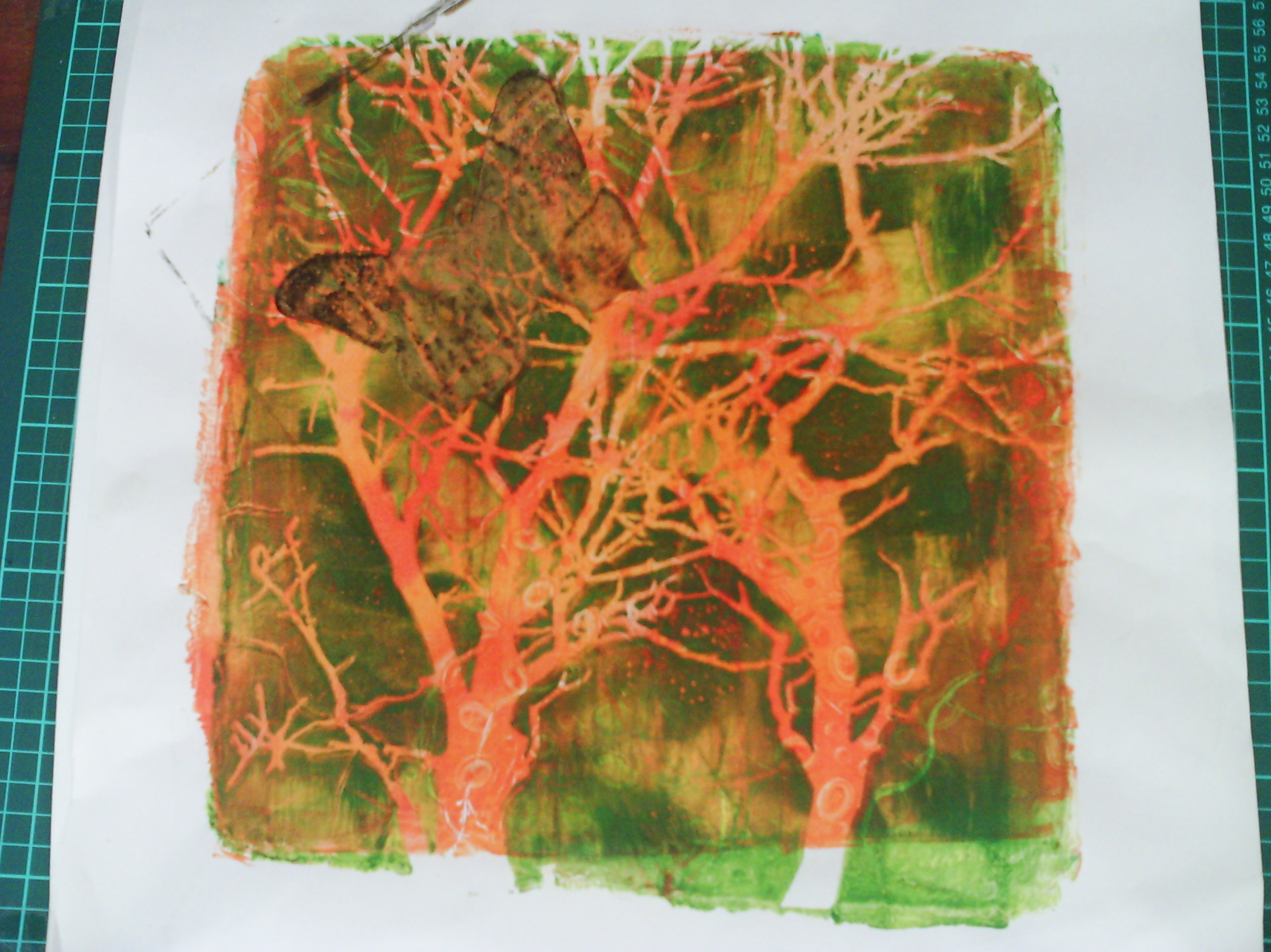 This one is the ghost print of the above tree print.  Each layer was a ghost print of exactly the same plate as above, but still gives a great effect. 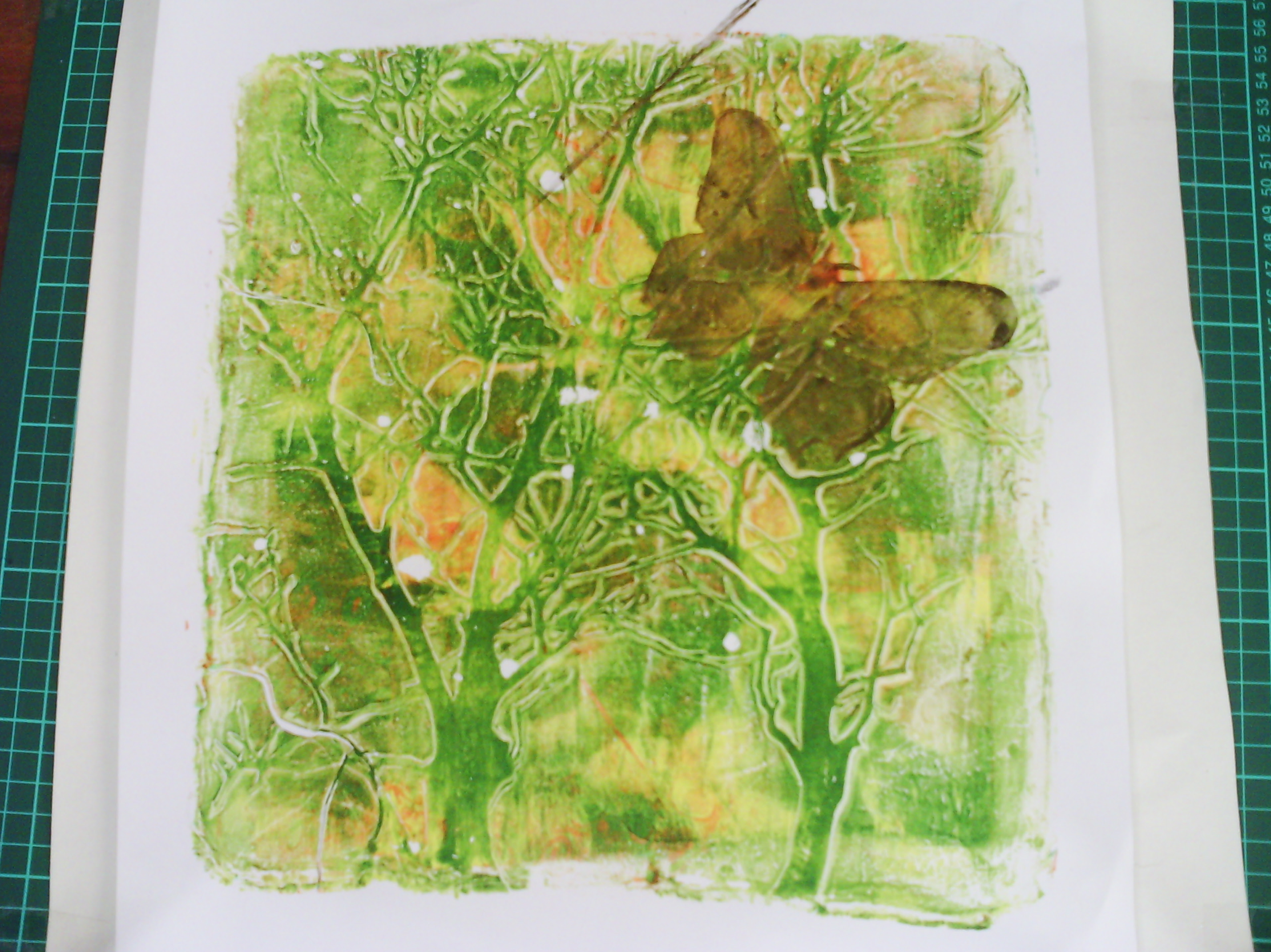 This one is a bit different.The tree was printed from the same green plate above, but after I had removed the mask.  The background was a little pale, but under the mask there was lots of paint, making the tree darker.  The edges of the mask picked up a lot of paint, resulting in the very pale halo around the tree.  The gold butterfly was the second layer.
I think that is enough for today, but as you can guess, I have a lot more to post.  I even got to brinting on fabric and have started work with those prints on the sewing machine.
My husband wanted to know what I would do with so many prints, but really, I am not actually concerned about that.  This is another example of  the artistic process bring about the process, not the product.  In making so many prints on so many different papers with diffferent layers and different colours, I have learnt a lot in a short time about colour mixing, layereing, contrast, and value that even if I never used any of the prints, it was still worth it.  I will talk more about that inmy next posts.