My latest Tangled Textiles piece was a bit of a shamozzle, and didn't turn out the way I wanted, but that's what art is about, experimenting.  Have a look at the other participant's work, which is amazing!
I had fun doing it and didn't let myself stress over the things that didn't quite work.  It's a learning experience and this certainly was, for me.

I cut lots of tesselating shapes that suggested water to me, with fusible on the back.

Then I arranged them and fused them for my background

I free motioned some music.  It is the opening bars of George frederic handel's "Water Music".

There is also some handwriting in free motion with variegated thread - very messy.

I also added some foiled text - which was one of the things I was really quite happy with and will do again.

I also added a print on chiffon, which worked well but the contrast was not good, so I outlined some parts.  I didn't like it, so I added a bit of scribbled free motion colour to the main characters.  It was a bit rough, but I just went with it. 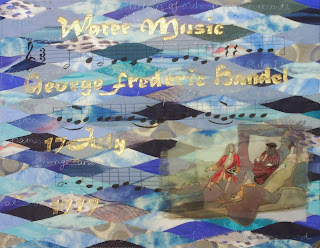 You can see my original idea of the water shapes in the background created major problems with contrast.  The shapes are all fused to the background.  Probably, I should have kept it simple and left the picture off, but it was the picture that inspired me in the first place.
"Water Music" does exist,  but the premiere as depicted in the picture is only hearsay, as the painting was painted a hundred years after the supposed day.  But supposedly the music was played for King george 1 on a trip up the Thames River on 17 July 1717.  This story is written in the background with free motion.
Also, my picture is a bit hard to read, and this, I think is due to the shiny gold affecting the other colours in the picture, like glare.
So that is my piece!  As I said, it was quite an experiment.