Those red buttons and a prize

I was getting some bits together for a recycled mixed media collage...

If we go clockwise from the bottom left, a plastic lid, some stained tea bags, foil lolly wrappers, plasterer's mesh, metal from an aluminium can, some decorating fabric samples, some vinyl scraps, felt and dyrd batting, painted tyvek and two plastic rings.  In the centre are a variety of  'embellishments', such as washers, resistors, metal and plastic tube bits,  old coloured LEDs, a reflector from a bike, a piece of mirror from a cd drive and other little bits and pieces I have collected.

Now if that list seemed like a long one, it is and putting the selection together took me almost all afternoon!  So, obviously, I haven't started on the piece yet.  It will be something for next week.
While you are waiting  however, I have decided to have a give away.

I already have my piece mapped out and it has a theme, but I will put every comment on this post (only) with a suggestion of what I might be going to do or a theme I might follow into the draw with a number and next Monday I will draw a winner from random.org.

The prize will be six floral fat quarters. 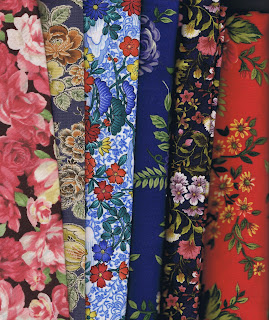 Red buttons
Now on to the real blog for today, which is showing you my last Tangled Textiles challenge, which happened whilst I was offline last month.
I did something really different this time and because it was a bit mixed media, I'm showing it to you today.

Here is the finished piece.  As you can see it is made up of lots of little mini quilts.  In fact, I assembled so many of these, I have enough to make another one, with different techniques to these, and I will show you these as I do them, rather than after the event, like I am now.
In no particular order, here are the little quilts and what I did with them.
All of the little quilts were backed with felt.

This one had a background fabric of textured brocade in brown and gold.  The background was overlaid with red sinnamay , which is a very stiff netting used in hats, woven from abaca.
I have then beaded randomly with gold seed beads around the two motifs.
The motifs are mad up of a square of red lutradur (or rainbow spun from pellon). Over this I have laid two flowers cut with a soldering iron from gold shot organza and the red lutradur, then I added the gold buttons, which came from a uniform of some sort.  The panel was bound with red satin ribbon and a running stitch in a thick gold thread.

This next one (I have rotated some of the photos so they show better on the blog) has a thick gold brocade as the base.  Over that I have taken a very thin red chiffon and done some large smocking.  On alternate smocking intersections I have sewn on either
stacked buttons, an antique mother of pearl and a pearly red with a large gold seed beed, or
a small gold seed bead and red sequin.
I have also added groups of three gold bugle beads down the centre triangles.
This panel is not bound, but has a red chain stitch with gold french knots down each side.

This panel was made from a red brocade with a gold woven pattern.  The motifs were layered from a gold lutradur flower, a gold shot organza flower, a transparent red button and a gold heart brad, which was poked down through the hole of the button for a perfect fit!
This one was not bound, but has a fly stitch in red around the edge with gold seed beads.

This panel was my favourite.  It had almost no sewing in it!  The base is a red fabric paper made from foils.  This was attached with large square brads.
Then a square of head distressed red chiffon and a square of gold shot cotton which had been frayed were attached with smaller square brads.
The red flower applique was an iron on one I had had in my sewing box for many years, then I added a gold filligree button I got from my Mother.

This panel had a panel of a japanese patterned red and gold brocade.  The button motifs were stacked from an antique dark red button, an antque mother of pearl button, a red star sequin and a large red seed bead.
Again, this one had a turned edge and was edged with red bugle beads interspersed with cross stitch in a very thick gold thread.

This one had a see through base, so the felt showed through.  The first layer was an angelina fibre film with gold organza and cream velvet pieces in it.  This was overlaid by a piece of red plastic netting from a fruit bag.  The motifs were composed of an antique mother of pearl button, a gold button and a red facetted bead, surrounded by spokes of  red bugle beads and a further circle of cold seed beads.
This panel was bound with a red organza ribbon attached with fly stitch in red thread.

This was my other favourite panel.  It was based on a piece of textured gold brocade bound with gold satin ribbon.  The motifs were made from a flower stencilled with modelling paste, allowed to dry, then painted with gold acrylic.  Each flower centre is a triangular red button topped with a large gold seed bead.  These were sewn on with gold thread in a type of wrap, so the gold thread forms 3d spokes.  It is hard to see in the picture, but is gorgeous in real life if I do say so myself.
I beaded in a diagonal grid with red seed beads in the spaces between the motifs.

This little one is a bit blurry.  The base os a bronze brocade quilted in diagonal running stitch with red thread.  It was bound with red nylon knitting tape, to which I added red seed beads.
The motif is layered from a large red, then gold lutradur flower, then a small red lutradur flower and a very old red button I had as a child.  I added some gold seed beads in the apexes of the petals of the button.

This very simple panel was formed on a base of a pale gold brocade with red painted fusible ironed on top.  I used another red daisy applique and  a flat gold metal button that had a shank, but was set flat by punching a hole threough the centre of the layers.  This was surronded by a scattering of gold seed beads and two little embroideries, the bound with blanket stitch in red.

This little one was made on a base of shot furnishing fabric in gold and brown.  A piece of shot metallic and red organza was frayed and placed over the top, held down by a row of gold seed beads top and bottom.
The motifs were stacked of a large antique button, not plastic, but probably bakelite, which makes it quite old, a red transparent button and a square bronze pearly button.  Again I attached these using the wrapping technique, which created two wings of spokes in red metallic thread because of the two button holes.

Another small one, had a red satin base with chain stitch top and bottom in a red perle thread.
Over this I put a piece of distressed ciffon in a red and gold textured colour.  The gold lines are metallic perl wire coils which were couched on.  The buttons were simply some gold thimble shapes that I couldn't resist.

Getting near the end now.  This one has red taffeta that I have tacked onto the felt underlay.  There is a glod lutradur square attached with small gold brads, a red lutradur flower and a red felt flower I bought in a packet at a discount store and then a tortoise shell button with a gold filigree centre.

This panel I had a lot of fun putting together.  The base is a bronzy/gold brocade.  Each gold button is set on a tiny label/tag which has been painted red with nail polish (the mixed media artist's best friend).  the buttons are attached with a large red seed bead and the tags each have a bow made from thick gold thread and are sewn down through the hole.
I couched on some red satin cord on a wavy pattern and emphasised it with long red stitches.

This tiny one was made from an origami hexagon folded from gold lurex.  The hexagon was actually made for a christmas table runner, but I decided to use white instead and this fit in perfectly for this piece.  The centre is a mother of pearl button and a small red button attached with  a large red seed bead.

This final panel, although ver small had a lot of work in it due to the seed bead border.  It is simply a god button with a red centre and red organza flowers on a piece of gold satin.

Wow, it almost took me as long to explain this quilt as it did to make it!
The whole quilt, with some painted lutradur as the top under the panels, was quilted with running stitch before the panels were added and bound with textured red organza ribbon decorated with red bugle beads and see beads.

Anyway, I hope you liked the piece and don't forget to comment about what I might do with my trash.

Spend more time being creative, turn off the computer
(after you've read this of course)