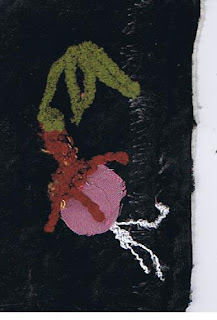 This little sample of a fuchsia flower uses the satin boucle from yesterday's post for the stamens, some satin petals and two chenille yarns for the sepals and stem/leaves.
Chenille
"The soft, fuzzy surface of chenille yarns, which resemble pipe cleaners in appearance, can be created in several ways. Most commonly, a fabric is first produced and then cut into narrow strips resembling a yarn. Then, when the fabric is cut, the raw edges become very fuzzy and produce the chenille appearance. Other chenilles are created by trimming a loosely-attached effect fiber to create the fuzzy appearance. Still other chenilles are created by attaching or gluing fibers to the yarn." Wikipedia

Each sample has been felted onto cotton and batting and includes a strand of un needlefeted yarn to the extreme right of each picture.
Quotes (in italics) on yarn definition are from wikipedia 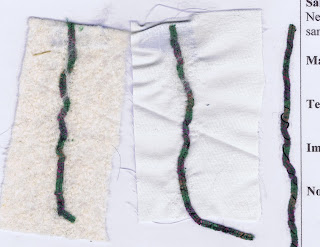 This chenille yarn is extremely dense.  The cross fibres are short, very closely packed, and stiff like on a toothbrush.  It felted best on to cotton, prpbably because of the short fibres, but the bond was very weak. In order to use this yarn with the felting machine, it really requires an overlay or a twist of  yarn which does felt well like slub, roving, or some fabric. It is probably really best sewed on to the work rather than felted 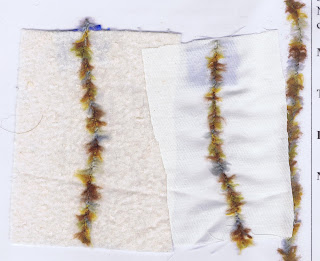 This chenille, on the other hand is very fluffy and the fibres are not packed so tight.  It felts excellently on just about any surface the needles will go through, as the fluffy fibres catch in the foundation easily. 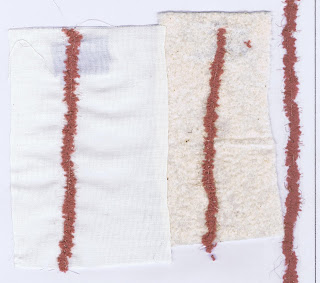 This third chenille, is also a fluffy one, which reminds me of the cotton chenille on bedspreads.  It is denser than the airy one above and also has a metallic inclusion in it.  It felts very well on both surfaces and transfers to the back quite quickly.  Because it felts so well, the metallic threads get meshed in and become part of it.  (metallic threads generally will not attach on their own) 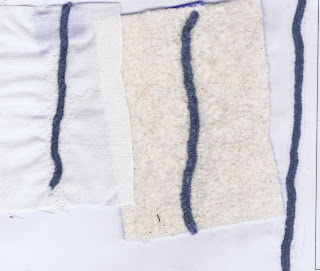 This chenille looks very like the first unworkable sample, however it is quite different.  Although the fibres are dense, they are not stiff, but cottony like the pink sample and this also felts well.  Because it is denser, it does require a few passes to attach and transfer to the back. 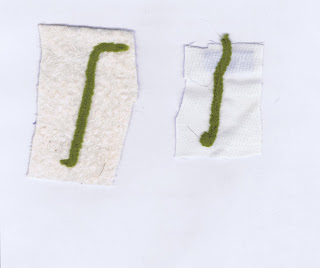 This is another fluffy or cottony chenille , which felts extremely well and was used for the stem and leaves in the fuchsia sample at the top of the page.  It is one that I use quite often in my work to create stems and leaves. 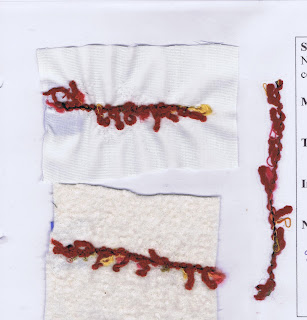 This last sample is  a crepe yarn and is the yarn used for the sepals in the fuchsia.  It is included in this section because the crimson strand is a narrow chenille, however the other two yarns are very tightly woven.
"Crepe yarns may be classified as fancy yarns and are created by tightening the twist given to a yarn, resulting in a kinked or looped strand."
The chenille strand, which makes up most of the crepe, is of the fluffy cottony type, but is very dense and in addition is quite twisted, so it does not fall into the category of easy to felt, but will attach with some work.
So with chenilles:
Happy needle felting
Posted by Vicki Miller at 4:08 PM