Taking the design process back to front

Today, I am going to talk about another WIP and how my initial design process there was the reverse in many ways of the one I began describing yesterday.
Sometimes, I have an idea in my mind for a long time and I might look for reference photos or inspirations for a while before I even think to start and in this case, I did not even start with a sketch. 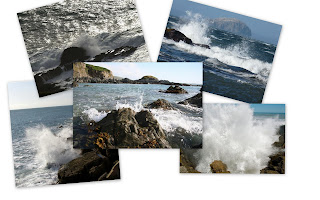 I had been given some SWARF (this is metal filings, like steel wool, that comes off a lathe when turning metal), because I had commented that it reminded me of the froth on waves, so making a piece with it became a bit of an obsession and of course my love of all things watery came into it.
The pictures above, (from geograph.org.uk via wiki media/creative commons) were my inspirations for this piece because I wanted waves crashing over rocks.
Instead of sketching, this time I began with the fabric itself. 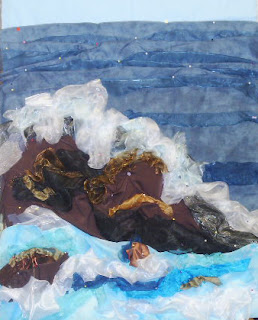 In the picture above, I have simply pinned scrunched fabric to a board where I thought it might work.  Of course, I pinned and repinned added and took away and looked at it and went away and came back.  In reality, my composition bears no real resemblance to any of the pictures, but takes ideas from all of them.

On my board, this does not look as balanced as it does in the picture.  This is an important point.  Sometimes, simply putting a frame around your work or cropping it can help to give it substance and depth.  See this recent blog here by Diane Perrin-Hock.  After looking at the photo, which is a crop of my collage, I opened it in Photoshop Elements (I am not going to go into detail about HOW I did it, only WHAT I did - How is an whole other blog) and decided that the sky needed a bit more room, because I felt there should be splashes of foam up higher. Below, I have extended the sky. 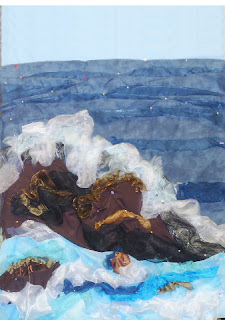 Also, this collage does not have the metal filings on it yet, so there is another layer above the waves, which you will see as I make up a simplified colour map of my piece in the steps below. 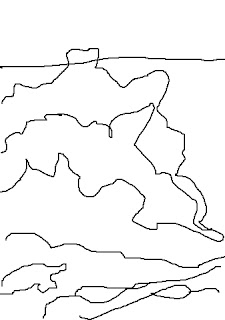 Here is a simple line drawing, made by tracing over the photo above, then saving the tracing as a new picture.  As you can see, I am not particularly precise when drawing on the computer, but IT DOES NOT MATTER - it is just some lines dividing the different areas of the picture.

Here are the first two layers, the black and brown of the rocks (obviously, the black is below the brown, like a shadow, but still, no need for real accuracy).

Next the dark and medium blues of the deeper water, both in the background and a little in the foreground. 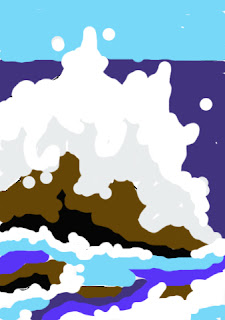 The final layer (also white) is where I intend to put the swarf to imitate froth.
But there is still something missing. 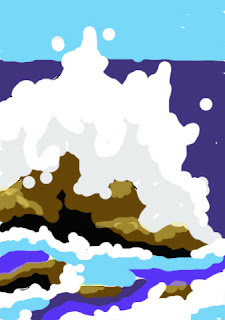 Here I have added a few highlights to the rocks, as it is a sunny day.
Now, I have a basic diagram of where I want things to go in my piece, so I can take all the fabric off and cut and manipulate it to make the textures I want, and when I put it back, it will probably look a lot closer to the final piece than my original simple collage.
Obviously, the colours I have used in the diagram are only a guide and are more values than actual colours.  They are areas where I might put several different pieces of fabric in the appropriate colour/value range.

So this was a different way to design.  This way is more hands on and about playing with fabric to get the effects you want - in a general way, which can then be refined later.

Don't forget to play with fabric - It's the best way to understand how it can go together.
Posted by Vicki Miller at 11:57 PM