I have been suffering with a dose of flu , and been very lazy, but I have been experimenting with sea and sky effects.
First my final cloud samples before actually making the real thing for....a project. 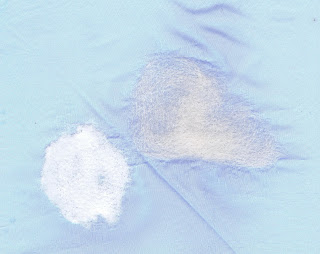 In the picture above I have used pale blue satin as a foundation.  The cloud on the left is cotton wool.  No, it is not a cotton wool looking cloud it is actually needlefelted with cotton wool - from the supermarket.  I actually liked the effect it had better than the marino tops/roving which is on the right.  I have used the cotton wool in a very, very secret project. 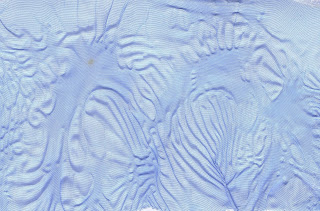 Whilst I was experimenting with needlefelting on the satin, I accidentally scorched some satin with a too hot iron.... and I liked it.  It reminded meof the surface of ripples in a pool of water.  I thought about how the pebbles at the bottom would show through and then I decided to repeat this with some organza which is more transparent.  In the samples below I have put a printout of pebbles under a range of scorched organza samples to see how it looks. 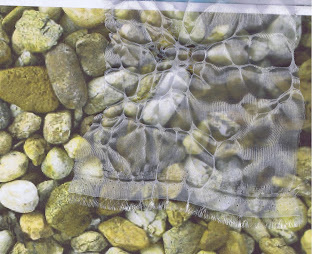 This first white organza bubbled up reallynicely and I felt it would form a nice clear edge for a pond. 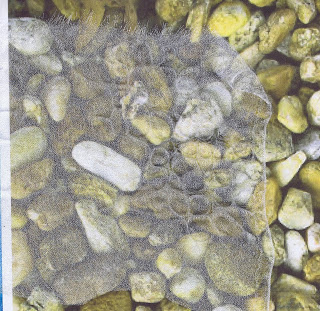 The next white organza was a bit more grainy in texture and looked alittle more frothy. 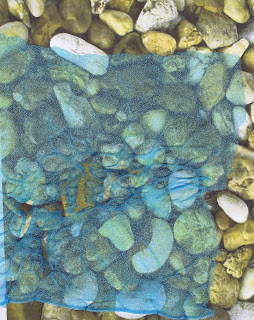 In the sample above, which is a pale blue,  I went a bit far with the iron,  but I liked the ripple effect.  Every piece of organza had a different heat tolerance even if they were from the same batch but different colours. This one is a deeper dark blue that would be good to use in the deeper part of the pool. 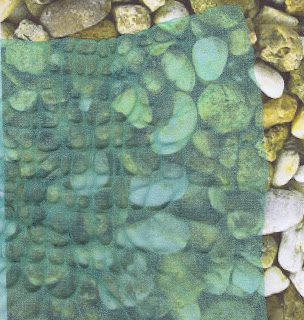 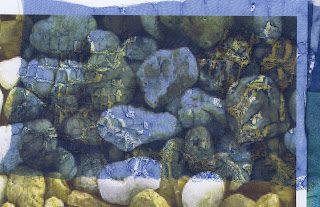 And this final sample of very dark blue was very touchy about temperature and time and even with several goes I could not catch it at the bubbling stage.  More experimentation needed here.

Then I went on to some samples to look like the ocean.  I have been dilly dallying with organza of different shades of blue and overlapping them to create the effect of waves.  I came up with this idea. 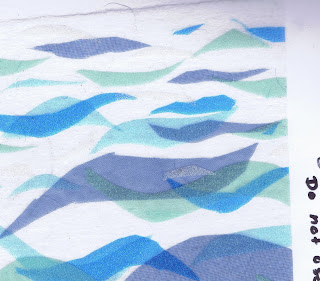 Here is the initial layer. I used organza with fusible behind.   It is important to keep fusing periodically so the little snips of water don't get moved or accidentally turned over, however you need to keep the heat to a minimum as well or else the organzas will start to melt.  They won't really buckle like in my above experiment, because the fusible stops the shrinkage, but they will melt and look a little glassy. 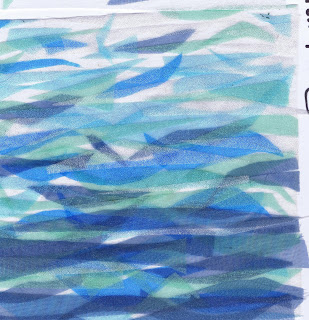 Here is a final sample after many layers have been fused and overlapped over each other.  I found as I went on that the squiggly shape was not really neccessary and that it took a long time to fill in areas due to it's shape.
So there we are I think I have found the texture I want for ocean waves.
Posted by Vicki Miller at 9:23 PM