Finally back to your tutorials, hopefully the routine will be correct next week.
As a refresher, we were working on a felted and embellished beach scene using lutradur 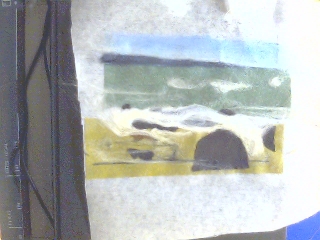 We have laid down the main elements and added felting.  In this tutorial we will add embroidery and beading.

I usually start at the top or the furthest away part of my scene.

Prior to embroidering, I test out the threads I have selected for suitability. 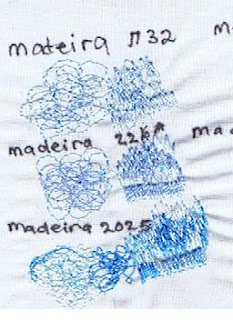 These were the first three threads I chose.  The first was a pale blue solid thread, the second was a tonal variegated with a short change, and the third was an ombre variegated.  I chose to use the ombre because the sky shades from dark to very light at the horizon and since the colour change was a long one, I could move from area to area depending on the shade.
I used a wide zig zag and moved side to side in a diagonal fashion.  This is very like stem stitch, which was covered in my machine embroidery stitch lessons.

You can see above how I moved around depending on the shade.
Next, I moved on to the sea.  I know the distant headland is next down, but it will be dealt with when I do the rocks, later.
Here is my colour sample for this section. 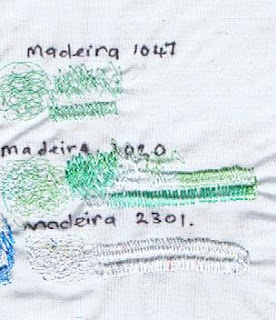 The first thread was a pale blue green, the second was an ombre variegated in blue green and the third was a white thread specked with  dots of other colours, which I tested to use in the wave tops.
Again, my choice was the ombre for the water, not because of any colour change in the water, but because it will give the water depth.

I have used a straight stich in a wavy overlapping, back and forth manner, across the water.  This gives it both depth and texture.  Now for the frothy bits. 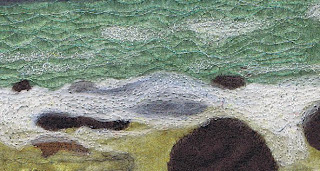 Still using a straight stitch and using the flecked white thread, I filled with  a variable granite stitch, and a bit of scribbly stippling thrown in.  I did not work over the grey and brown areas.  These will be done next in the next post, tomorrow and I will spend the evening  picking out the beads for the sandy area.